Previous post: I Refuse To Be A Prisoner Of My Past
Next post: Every Moment Is Worth It

The future got significantly brighter today because of the acquisition of another ship, L’Astrolabe, and the fact that YWAM Norway has elected to join us collaboratively in our work.

YWAM Norway will join YWAM Ships Kona with the vessel the m/v L’Astrolabe (read more about her new name here). This will be a tremendous boost to our ability to reach the 293 populated islands of Papua New Guinea with God’s love, and mark the beginning of a new season as we build strength together along with YWAM Townsville, YWAM Newcastle, University of the Nations Kona, and YWAM PNG.

Six significant YWAM locations all working at the same table; each bringing hope and delivering healing to some of the most isolated and forgotten families on the planet.

This exciting time starts in one week when we receive this wonderful new ship on March 24th from P&O Cruise lines!

How did all this happen?

France, who has been chartering this ship in the South Pole for the last two decades, recently decided to move the responsibility of their scientific research efforts to their Navy. So, through a set of remarkable events, P&O has made it possible for YWAM to acquire the m/v L’Astrolabe for its work in PNG.

A connection with Ken Mulligan, Managing Director of YWAM Medical Ships Australia and a Partner in YWAM Medical Ships PNG, resulted in this vessel being offered to serve the mission. P&O agreed the $11.6m ship would be sold for $300,000 USD for the cost of parts, fuel and reposition expenses. They agreed to their current crew delivering her from Hobart, Tasmania, Australia to Townsville, Australia. They depart Hobart this Friday. 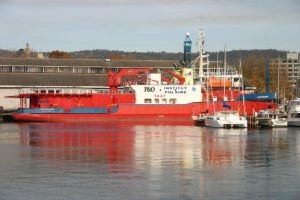 Identifying which entity would operate the vessel resulted in a fast track of plans for YWAM Ships Kona, and now in an unprecedented move, YWAM Norway has decided to join the effort with us. In a recent board meeting they have committed to work collaboratively by bringing their maritime and volunteer strength, as well as contribute funding alongside Kona, Townsville, and a host of other YWAM centers taking up offerings to make the acquisition of this new ship a reality.

Thank you to everyone that has contributed.

Brett Curtis, Managing Director – YWAM Ships Kona and a Partner in YWAM Medical Ships PNG said, “This moves us closer to the reality we have sought for some time. As we look at PNG as a whole, we now have six entities engaged bringing great strength to our future.

Each YWAM location is legally and financially separate yet planning and collaborating to reach common goals. It is a great example for our future. This is not centralizing things like we did in past decades, but rather intentionally placing ourselves in the position of being inter-dependent. I recall a message given by Winkie Pratney concerning moving from dependence to independence and finally choosing interdependence.

So now let’s plan together so audaciously that we would absolutely fail without all the partners at the table!”

If you have any questions or would like to join, feel free to contact one of us: