On September 22, our Discipleship Training School outreach team slowly motored up to the dock of the tiny village Palma Bahia with an overwhelming sense of anxiety. A two-hour boat ride from the YWAM Panama Outpost had brought us on the cusp of our new home for the next eight days. Or so we hoped.

The question weighing on the minds of all ten team members was, “Would we be accepted by this village?” Arrangements for our stay had been made in advance, but during times of prayer, we felt our team may need to overcome rejection at some point during our outreach.

The closer we got to shore, the larger the group of children grew in order to see us, the hopeful visitors. A stern looking older man walked out to meet our boat at the end of the dock.

After a few minutes of intense discussion, the man we came to know as Hermin, warmly welcomed us to Palma Bahia. We were accepted! And so began eight days of adventure, that would prove to be a testament of God’s love. 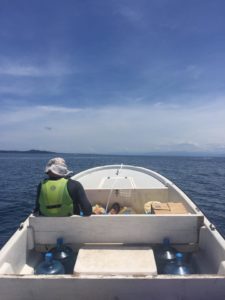 Once unpacked for our stay, we went about determining our sleeping arrangements. But finding room to safely hang our ten hammocks certainly proved to be quite the challenge in the modest grass-roof jungle-hut just outside the village. Eventually, we found room to hang each of the hammocks at various heights to create more space.

Our team was very thankful for the lodging however, as a village leader had graciously offered his home while he was away. The accommodations were also a humble reminder of the luxuries many of us take for granted in our home towns.

The following day we began what became our regular routine of a morning ride into town, returning home for lunch, then making our way back to the village in the afternoon to continue our work. The unusual part of our commute though, was the fact it came in the form of an old wooden canoe with a motor. 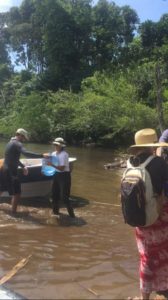 Multiple holes in the boat and our inexperience with balancing in a canoe ensured our daily rides were never boring. By the end of the stay however, several team members considered our commute to be one of the highlights each day. This was easy to understand when looking at the silhouettes of mountains in the distance and the most epic cloud formations any of us had ever seen.

The beauty of God’s creation in the surrounding area was certainly undeniable, but so to were the pressing needs of the village. Ironically, Palma Bahia was surrounded by ocean water, but sorely lacked water clean enough for drinking and cooking. This reality contributed directly to high infant mortality rates throughout the country, particularly in indigenous locations. 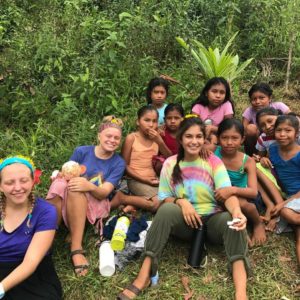 We came to learn that children in communities throughout Panama are called “Chi Chi” until the age of two when they are finally given a formal name. Calling their children Chi Chi, creates an emotional buffer until the parents are confident their child is healthy and thriving.

We also learned opportunities for work were hard to come by for the men of the village, as a boat ride to the nearest places of employment often cost more than a day’s wage. Lastly, after spending more time with the people of Palma Bahia, our team sensed a feeling of hopelessness over the community, particularly from the women of the village.

Prayerfully, our team set out to address these issues.