“I first started dreaming of Introduction to Primary Health Care during my School Of Ministry Development. I was figuring out my giftings, what I was good at and what God was calling me to do.”

Grace Bloom has been a full time staff volunteer at YWAM Orlando since 2014. Having graduated from her DTS in 2012, Grace has traveled to South East Asia, worked in Mission Adventures with YWAM Orlando, hosted teams in the Dominican Republic, completed the School Of Ministry Development (SOMD) and worked in many other areas at YWAM Orlando. 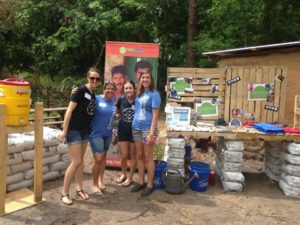 During SOMD, a second level UofN School of Ministry Development, while Grace was figuring out what she wanted to do, God was showing her a future working with ships in the medical field. This dream would be through a training course called Introduction to Primary Health Care (IPHC).

As this amazing idea was birthed, it was Grace’s thoughts that would make her question doing the course.

“I didn’t think I was capable. From the photos, it looked intense. I felt I would be odd man out; that I would be the only one without a medical background. I was scared.”

It would be 4 years until Grace would start IPHC. “I had forgotten about it completely until I was doing Word By Heart in 2016.”  Word By Heart is a 6 month course where you learn one of the gospels by memory, take that gift to the nations and present the gospel.

During the beginning of Word By Heart, Grace received prophetic words over her life. The dreams she had let go of during SOMD about IPHC were coming back to her: medical ships and reaching the isolated. God even revealed Papua New Guinea (PNG) to her at a Christian event she had gone to. All these little pieces were coming together.

She looked into going to both YWAM Ships Kona and YWAM Townsville, Australia as options for taking IPHC. God was slowly stirring her heart for Kona, Hawaii. The YWAM Ships base in Kona runs an IPHC, has a medical ship, and does outreaches to PNG. Everything was lining up, including her finances.

“Money came in and I didn’t know where from. I thought, ‘This is it. Oh… the time is now.’ Then I had doubt. I applied a month out but only decided to do the course 2 weeks before it started.”

She had received a phone call after being accepted from one of the Ships staff which helped in deciding. She chose to go to Kona days later when, after praying, she couldn’t stop thinking about Hawaii.

IPHC is different than any other school she has taken with YWAM. It has a more academic focus.

It’s an entry level course for anyone interested in primitive health care. It equips missionaries with the skills to provide and teach physical and spiritual wellness in places with little or no access to health care.

Grace and her classmates received practical experience and a good amount of hands on learning. They were taught the difference between preventative care and curative care. It wasn’t just about treating diseases but also learning how to teach communities about hand washing, hygiene, etc.

One of the most incredible things Grace learned about was the musculoskeletal system. This system provides form, support, stability, and movement to the body. It’s made up of the bones of the skeleton, muscles, cartilage, tendons, ligaments, joints, and other connective tissue that supports and binds tissues and organs together.

“It was amazing to learn how God created our bodies to heal themselves and how everything works together.”

Once the lecture phase of IPHC was completed, the staff and students headed to PNG for outreach. Here’s where they traveled with the m/v Pacific Link to remote villages and provided medical aid to the people there.

A highlight for Grace during this time was staying in one of the local villages in Angoram, PNG. She has a heart for relationships and being able to stay with them, eat and talk with them helped in building relationships.

“I fell in love with the people. I enjoyed being with them and they became like family.”

Since arriving back in Kona after outreach, Grace has had time to reflect on her IPHC experience in and out of the classroom. She realized she came into this with her own expectations, which were shattered.

Halfway through the lecture phase, she felt God was showing her that this was His dream – the training, the outreach, caring for the people of PNG. The whole thing was God’s idea.

“It was like I was invited in to be a part of it, to do what He wants me to do. It wasn’t about my own satisfaction.” 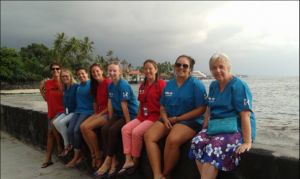 The constant theme she was faced with during IPHC was: ‘Are You Willing?’ She felt God was always asking her to do something. Every week she was learning to let her Yes be Yes and having the assurance that He was there with her boosted her confidence.

Looking towards the future, Grace knows that she can say ‘Yes’ even when she doesn’t know all the details.

Click here to see how you can get involved.